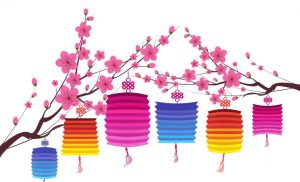 Chinese Moon Festival
Saturday, September 14th, 10am-2pm
Enjoy creating Moon Cake art projects, performances, and a special Shadow Puppet Story “A Big Moon Cake for Little Star” by Grace Lin.  This whimsical origin story explaining the moon’s phases tells the tale of Little Star’s lack of self-control in not being able to resist a nibble here and there on the yummy mooncake she has baked with her mother.

The Moon Festival, also called the Mid-Autumn Festival, is a lunar celebration and is the second most important festival in China, after Chinese New Year. Celebrated in other Asian countries such as Vietnam, Singapore, the Moon Festival celebrates family reunion, harmony and a successful harvest.  Celebrated when the moon is believed to be the biggest and fullest, the inherited customs of moon celebration ceremonies is imitative from the ancient belief that a full moon is a symbol of reunion, harmony, and happiness.